VANCOUVER, BRITISH COLUMBIA – July 4, 2018 -- Permex Petroleum Corporation (“Permex” or the “Company)” (CSE: OIL) is pleased to announce that it has recently completed the previously announced Purchase Agreement (the “Agreement”) with Energy Properties 2000-1 LLC, a partially owned company of Wilbanks Reserves Corporation (collectively, “Wilbanks”), and now holds a 41.4% working interest in the ODC San Andres unit and 48% in the W,J. “A” Taylor lease (the “Assets”) located in Gains County, Texas (see Figure 1 below; the “Acquisition”). The ODC unit and Taylor leases further scale Permex’s land holdings in west Texas.

Mehran Ehsan, President & CEO, stated: “We are very pleased to complete this highly anticipated acquisition integrating the ODC and Taylor leases into the long-term scale growth of the Company. This not only provides us access to work side by side with one of the worlds elite oil and gas operators, but will also allow us the potential for future synergies. This acquisition also comes at a time we feel crude oil is entering a more bullish cycle.”

Substantial historical exploration, development has been performed in the area and on the ODC & Taylor properties. The ODC San Andres field was discovered in 1957 at a depth of approximately 5,450 feet. Currently there are 35 active oil/gas wells and 15 water injection wells. The ODC San Andres Unit was formed and waterflood began in 1969. The ODC San Andres Unit covers 1,220 HBP acres. Cumulative production from the field is 4,420 MBO and 1,477 MMCF. Current well spacing is 20 acres per well.

The W.J. “A” Taylor lease was drilled in 1970 and cumulative Devonian production is 1,153 MBO. There is currently one producing well and one water supply well.

Permex plans to re-stimulate the producing wells, frac the wells that have low fluid entry, bring online the shut-in wells, as well as consider additional vertical and horizontal wells on the property. Since there are no depth restrictions, Permex owns all basement rights on this property which includes the highly sought after Wolfcamp. 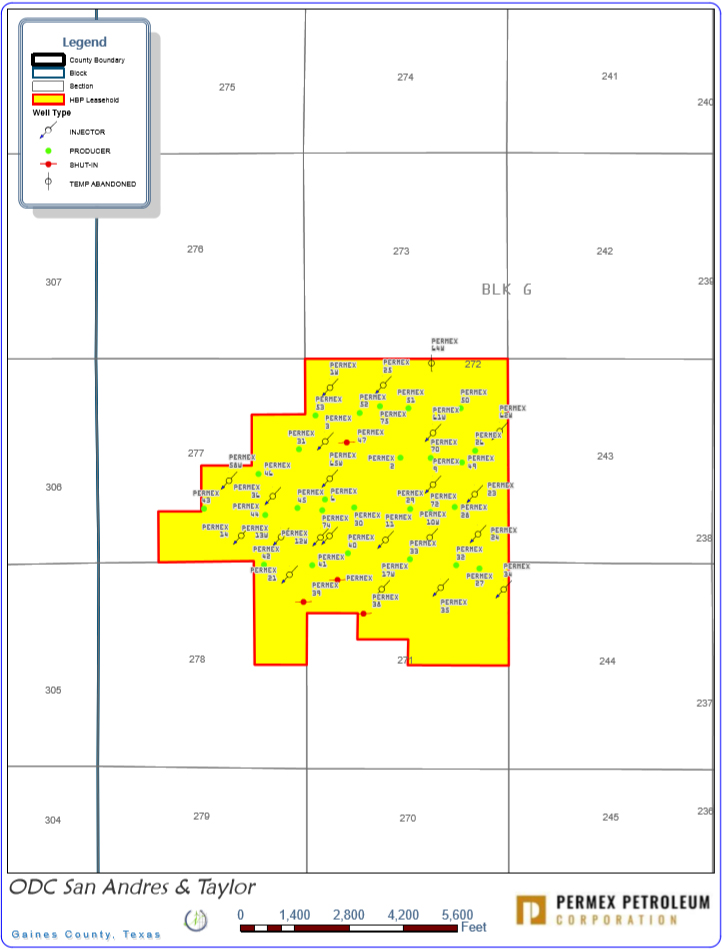 About Permex Petroleum Corporation - www.permexpetroleum.com
Permex Petroleum is a uniquely positioned junior Oil & Gas company with assets and operations across the Permian Basin of west Texas and the Delaware Sub-Basin of south east New Mexico. Permex has a current focus on identifying, evaluating and acquiring oil and natural gas assets in North America and enhancing and developing its currently held oil and natural gas assets in Texas and New Mexico. Permex owns and operates on Private, State and Federal land.

No securities regulatory authority has either approved or disapproved of the contents of this press release.

This press release contains forward-looking statements and information within the meaning of applicable securities laws (collectively, "forward-looking statements"), which reflect the Company's current expectations regarding future events. Statements in this press release which are not purely historical are forward-looking statements and include any statements that express or involve discussions as to expectations, beliefs, plans, objectives, assumptions or future events or performance (often, but not always, through the use of words or phrases including, but not limited to, and including grammatical tense variations of such words as: "may", "anticipates", "is expected to", "estimates", "intends", "plans", "projection", "could", "vision", "goals", "objective" and "outlook") are not historical facts and may be forward-looking and may involve estimates, assumptions and uncertainties which could cause actual results or outcomes to differ materially from those expressed in the forward-looking statements. Such forward-looking statements include, among others, the anticipated closing of the transactions contemplated under the PSA on the terms set forth therein, the significance of formations in addition to those formations already producing, the anticipated completion of an independent reserves evaluation by a reserves evaluator engaged by Permex and future plans for the property subject to the PSA, including without limitation the planned design of a comprehensive frac re-entry program.

The forward-looking statements in this press release are based on a number of assumptions, including, but not limited to, assumptions regarding the stability of commodity prices, that general business, economic, capital market, legal and political conditions will not change in a materially adverse manner, that the transactions contemplated under the PSA will close in accordance with the terms set forth therein and that the attributes of the property subject to the PSA will not vary materially from management's expectations. Actual results could differ materially from those projected in any forward-looking statements due to numerous risks, uncertainties and other factors. Such factors include, among others, risks inherent in the oil and gas industry as well as the risks normally encountered in a newly established business, including but not limited to: negative cash flow; lack of adequate capital; title to property; reliance on operators; reliance on partners; liquidity concerns and future financing requirements to sustain operations; dilution; limited history of operations and revenues and no history of earnings or dividends; competition; economic changes; changes to expectations resulting from independent reserves evaluations, drilling programs and other activities related to the Company's properties; and uninsured risks.

Reserves
All estimates of reserves and future net revenue contained in this news release with respect to the San Andres ODC Unit & Taylor leases are derived from independent evaluations by MKM Engineering with an effective date of June 30, 2018, as set forth in the Reserves Report. The reserves data summarizes the crude oil, natural gas and natural gas liquids reserves of Permex and the net present values of future net revenue for these reserves as of September 30, 2018 using forecast prices and costs, not including the impact of any price risk management activities. The Reserves Report has been prepared in accordance with the standards contained in the COGE Handbook and the reserve definitions contained in NI 51-101 and CSA 51-324. Permex engaged MKM Engineering to provide an evaluation of its Proved and Proved plus Probable Reserves and no attempt was made to evaluate possible (as defined in NI 51-101) Reserves.

All evaluations of future net revenue are after the deduction of royalties, development costs, production costs and well abandonment costs but before consideration of indirect costs such as administrative, overhead and other miscellaneous expenses. The undiscounted or discounted net present value of future net revenue attributable to reserves estimated by MKM Engineering do not represent the fair market value of those reserves. There is no assurance that the forecast price and cost assumptions contained in the Reserves Report will be attained and variations could be material. Other assumptions and qualifications relating to costs and other matters are summarized in the prospectus. Readers should review the definitions and information contained in "Oil and Gas Information" in the prospectus in conjunction with the reserves information contained in this summary. The recovery and reserve estimates described herein are estimates only. The actual reserves associated with the Company's properties may be greater or less than those calculated.

Barrels of Oil Equivalent
Disclosure provided herein in respect of BOEs may be misleading, particularly if used in isolation. A BOE conversion ratio of 6 Mcf:1 bbl is based on an energy equivalency conversion method primarily applicable at the burner tip and does not represent a value equivalency at the wellhead. Given that the value ratio based on the current price of crude oil as compared to natural gas is significantly different from the energy equivalency of 6:1, utilizing a conversion on a 6:1 basis may be misleading as an indication of value. There is no assurance that such price and cost assumptions will be attained and variances could be material. The recovery and reserve estimates of crude oil reserves provided herein are estimates only and there is no guarantee that the estimated reserves will be recovered. Actual reserves may be greater than or less than the estimates provided herein.